The Sámi Parliament in Finland adopted Principles for Responsible and Ethically Sustainable Sámi Tourism on the 24th of September in 2018. The primary purpose of these ethical guidelines is to terminate tourism exploiting Sámi culture and to eliminate incorrect information about the Sámi distributed through tourism. The second priority is to safeguard the cultural practices and traditions of Sámi population outside the travel industry.

Who Are the Ethical Guidelines Meant for?

The ethical guidelines are primarily meant for tourism actors and operators outside the Sámi community who carry out touristic productisation, representation, marketing and communications of Sámi culture. Furthermore, the guidelines are for visitors arriving in Sámi Homeland.

The illustrations supporting the message of the ethical guidelines for Sámi tourism are made by comic artist Sunna Kitti.

Sámi Homeland in Finland is situated in Northern parts of County of Lapland.

The Sámi are the only indigenous people within the area of European Union. Sámiland, more commonly known by its North Sámi name Sápmi, is the core region inhabited by the Sámi, extending across vast areas in Norway, Sweden, Finland and the Kola Peninsula in Russia.

In Finland, Sámiland covers the area of Sámi Homeland which includes the municipalities of Enontekiö, Inari and Utsjoki in their entirety and the northern part of the municipality of Sodankylä (the area around Vuotso village, that is, Lappi reindeer herding co-operative). 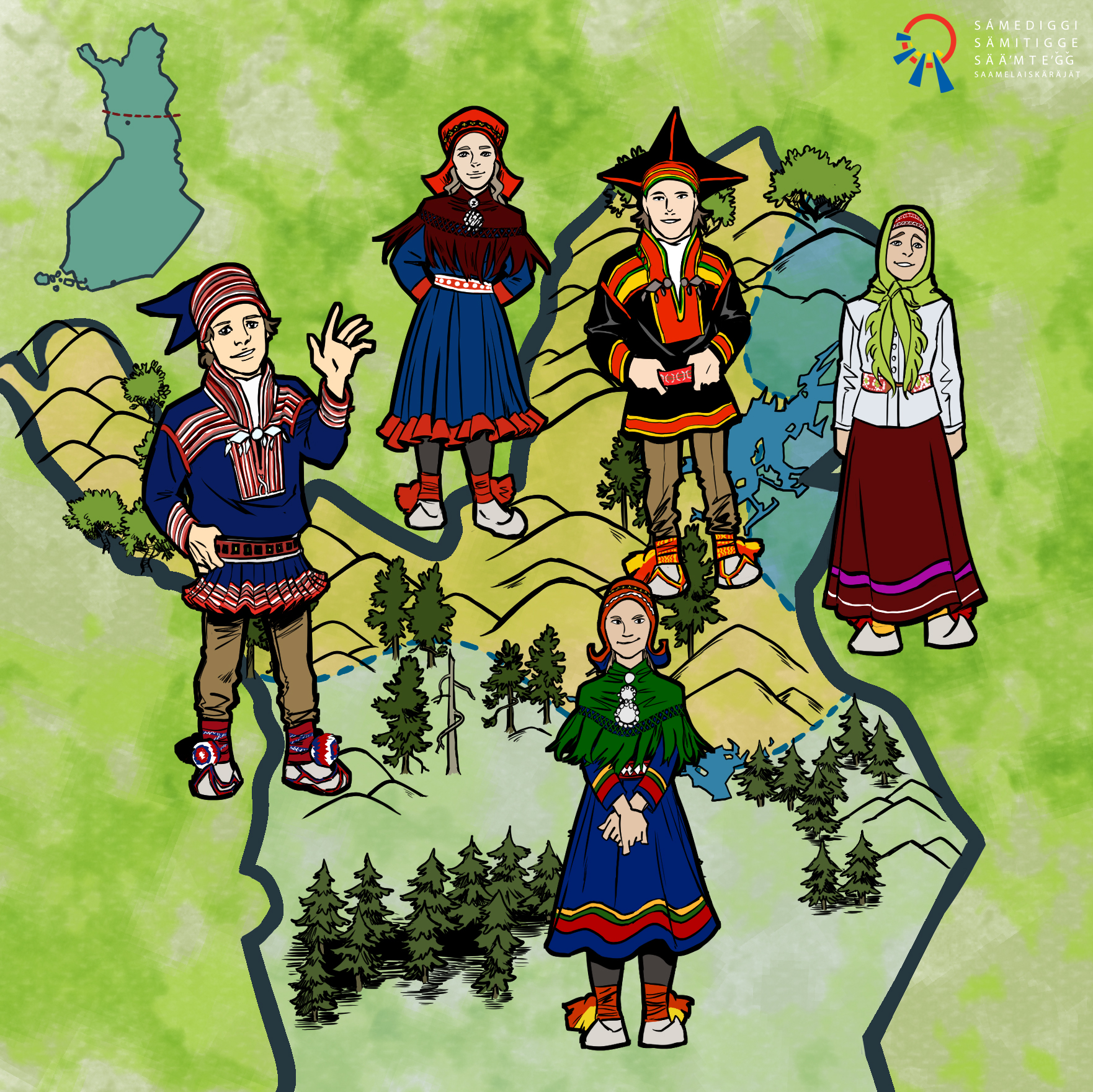 Symbols of Sámi culture have been productised and represented in tourism exploiting Sámi culture in Finland for decades. For a long time, the productisation of Sámi culture has been both defined and executed by outsiders.  In the worst cases, the incorrect, primitivised image of the Sámi, that is widespread in tourism exploiting Sámi culture, offends and/or objectifies the Sámi community. To correct the tourism landscape to be more truthful and equitable, the Sámi Parliament in Finland adopted Principles for Responsible and Ethically Sustainable Sámi Tourism on the 24th of September in 2018. 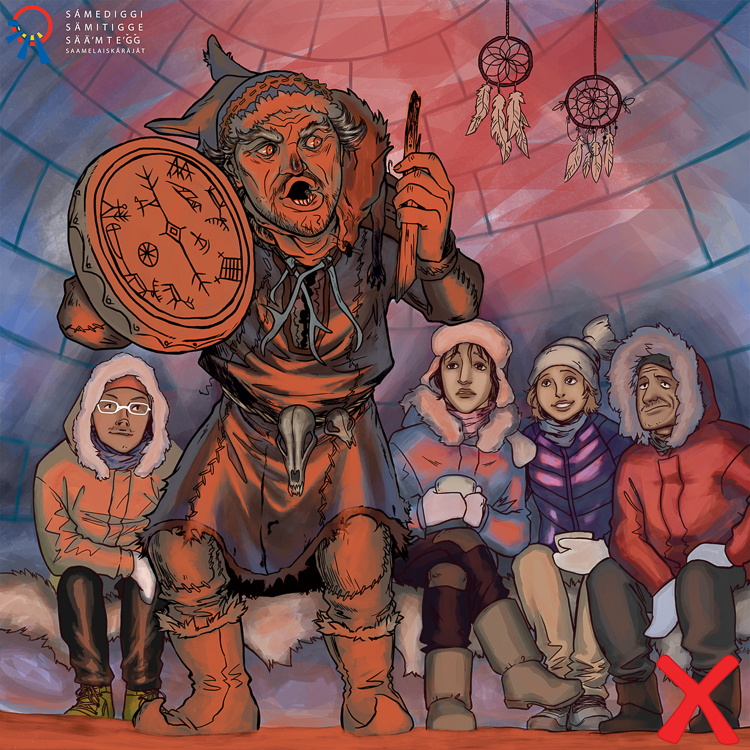 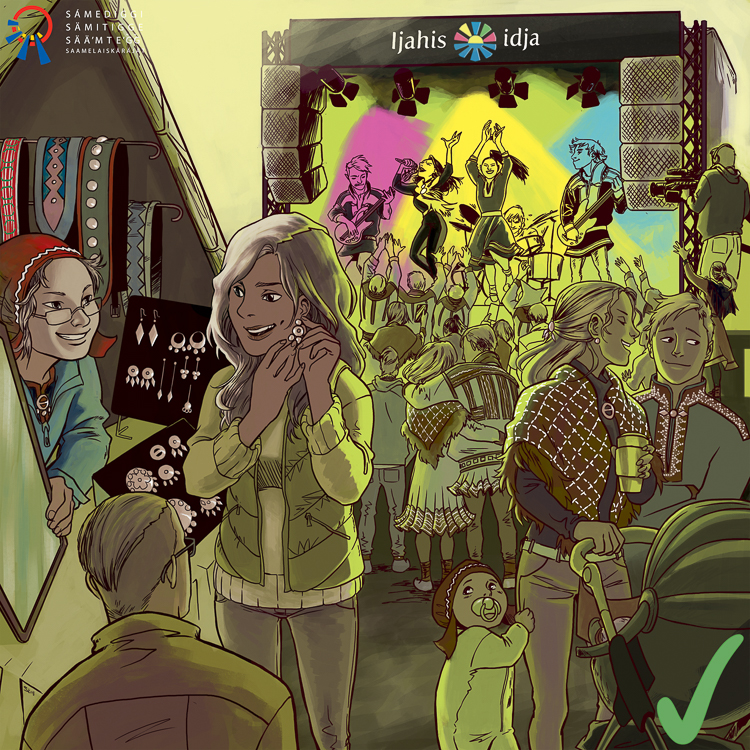 The Future We Want

In the vision, there is a Sámi tourism information centre distributing accurate information on the Sámi and Sámi culture to visitors and various interest groups in tourism industry. Furthermore, the centre has information about the responsibly and ethically sustainably operating Sámi tourism entrepreneurs. In the good vision, also the everyday lives and festivities of the Sámi community as well as land use in Sámi Homeland have been successfully co-ordinated with tourism while the rights of the Sámi and Sámi culture have been taken into consideration and respected.

The Challenges of Sámi Tourism and Tourism in Sámi Homeland

The opposite of the good vision is The Future We Do Not Want. In this illustration, the vision in the ethical guidelines has not taken place. The uncontrolled and constantly increasing numbers of visitors arriving in Sámi Homeland have caused increasing amounts of challenges that have not been manageable or solved. The traditional livelihoods of the Sámi have been forced to retreat due to tourism. The safeguarding of the cultural practices and traditions of the Sámi not involved in tourism have failed. Instead, the everyday lives and festivities of local communities have ended up as tourist attractions against the wishes of the local people. 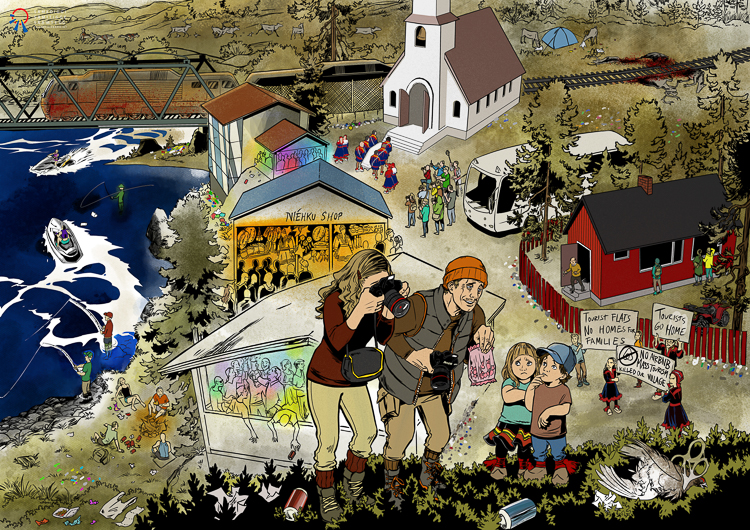 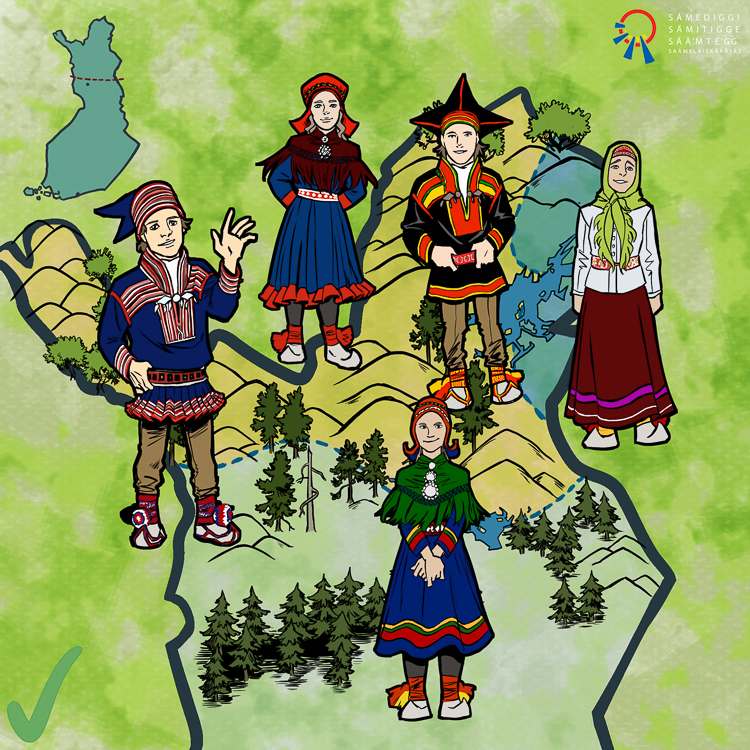 The cornerstone of Sámi tourism is that the productisation and representation of Sámi culture is based on a strong connection with and responsibility towards the Sámi community, families and/or siida concerned whose culture and/or traditionally inhabited lands/usufructuary areas are being utilised and/or represented in a tourism product.

Sámi tourism is defined as tourism where the resources of Sámi culture are utilised to produce tourism services offered to the public on commercial basis. 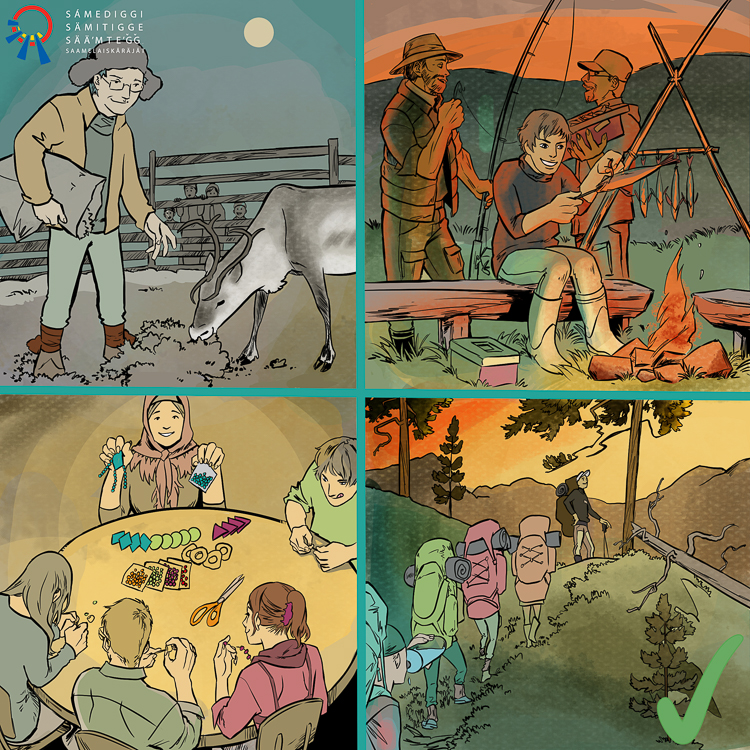 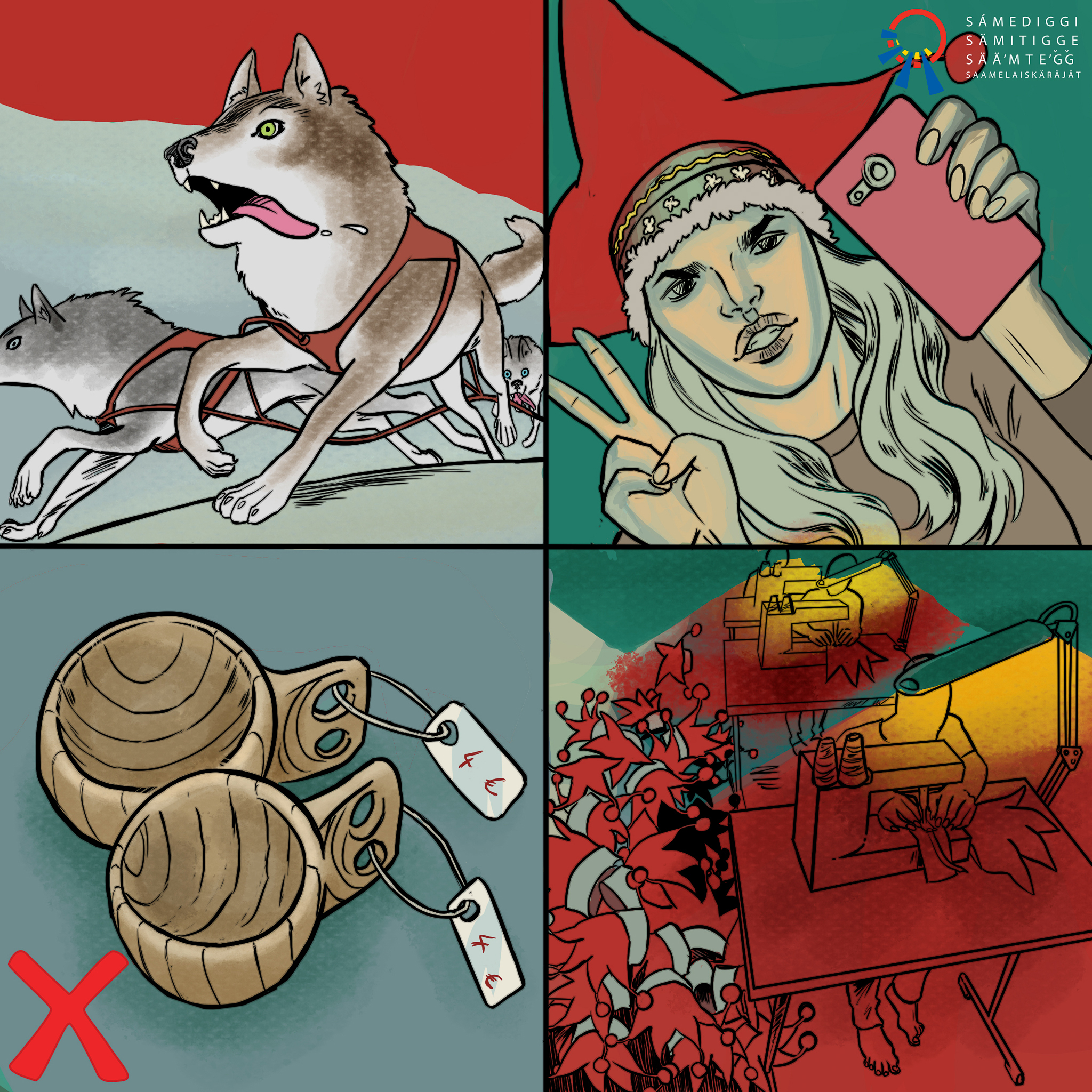 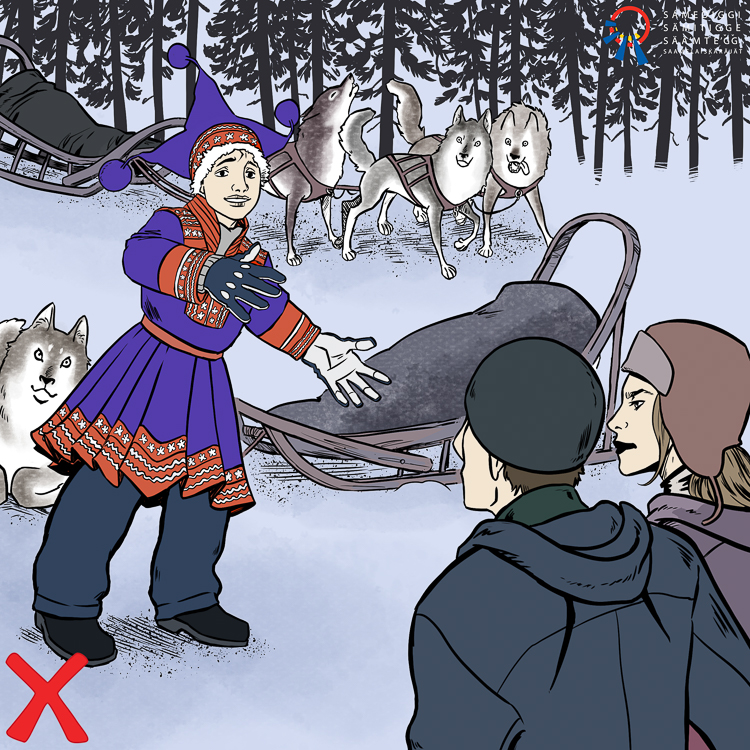 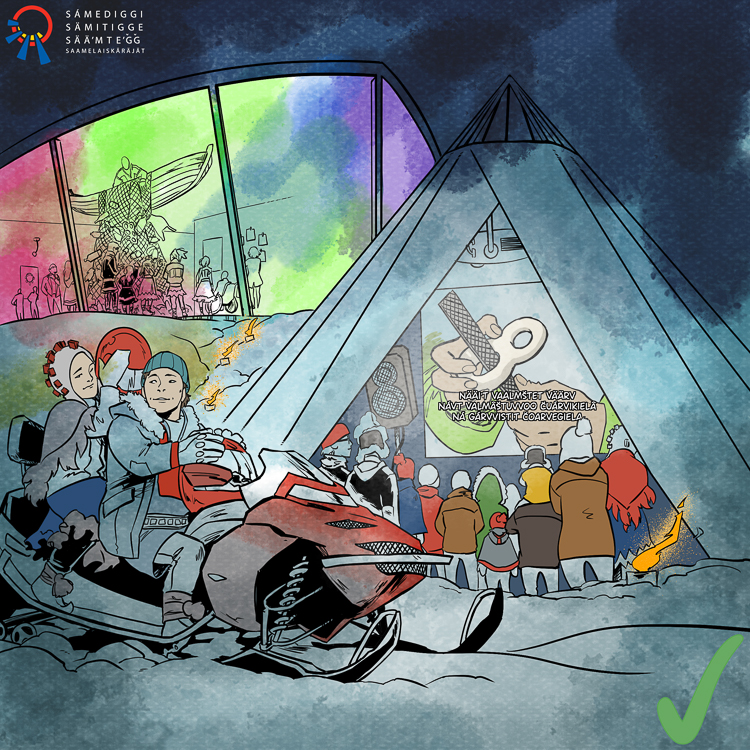 Sámi culture includes, among others, the Sámi language, Sámi cultural heritage, cultural expressions, Sámi art, traditional knowledge of the Sámi, the relationship of the Sámi with nature, traditional Sámi livelihoods and the modern ways of practising them as well as other cultural customs and manifestations practised by the Sámi as an indigenous people.

​Therefore, for example, the Sámi language, stories, music and the most visible cultural symbols such as the Sámi dress and Sámi handicrafts are closely connected, among other things, with traditional Sámi livelihoods, forming an inseparable entity in which each element relies on the others in order to remain vital and, thus, enabling  the preservation, development and transmission of Sámi culture to future generations.

For example, if one element of Sámi culture were to disappear, or if its area of activity were to be limited, this would have an immediate impact elsewhere.

The Living Cultural Landscape in Sámi Homeland vs. “Wilderness”

What may be “wilderness” for a visitor, is home for the local Sámi people, and for many, also a source of livelihood and/or subsistence economy unconnected to tourism. While there may be no visible signs of human presence in nature, there is not a single place or area in Sámi Homeland that does not have a Sámi name and that has no cultural use and/or significance related to a season.

The land use based on Sámi traditions, that is, for purposes other than tourism, must be taken into consideration and highlighted also in all tourism operations and activities. Untouched wilderness does not exist in Sámi Homeland, even if it may seem so to the outsider. The Sámi have traditionally utilised nature without leaving material traces on the fragile environment of the North. The concept of nature held by visitors from other cultures may differ significantly from that of the Sámi. Therefore, especially when marketing the Finnish customary law of ‘Everyman’s Rights’, responsible conduct in nature, the limitations to these rights, and the importance of leaving no traces behind must be emphasised. The absolute basis is that pure and healthy nature, which is one of the key attractions for Artic tourism, must be preserved for future generations. This aspect must be made known to all visitors and the whole travel industry. 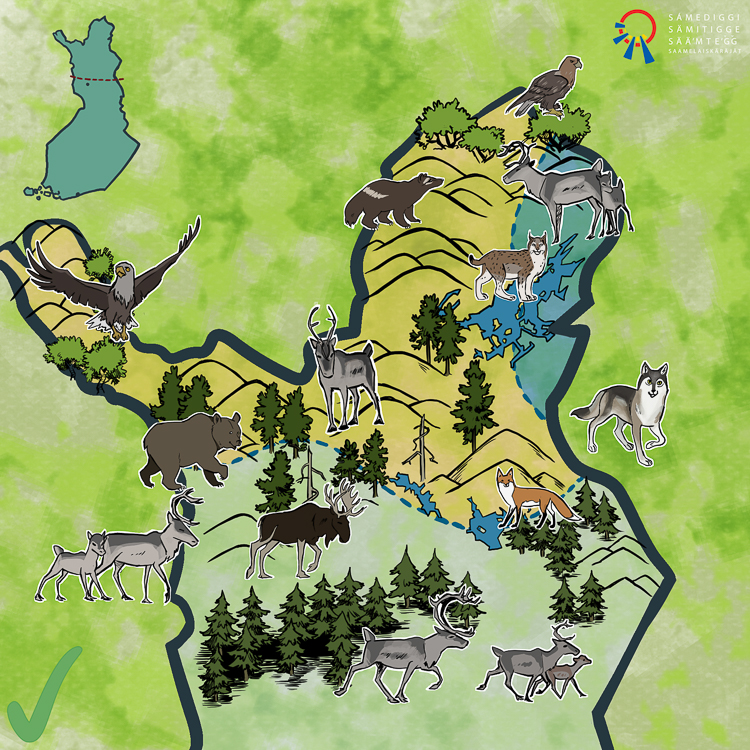 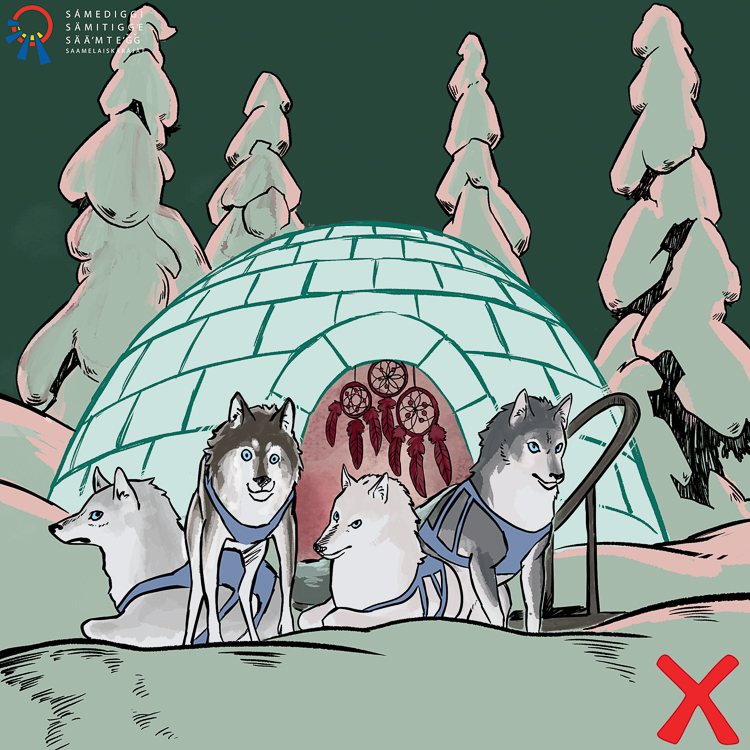 An example of a particularly damaging and culturally unsustainable borrowed tradition is touristic dog sledding. Especially in certain areas, this practice is in strong conflict with reindeer herding, one of the cornerstones of Sámi culture, causing direct and/or indirect damage to this traditional livelihood. 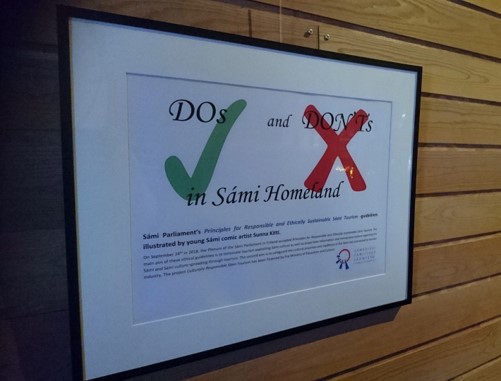 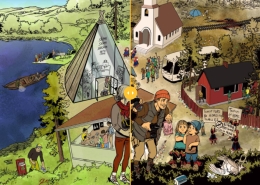 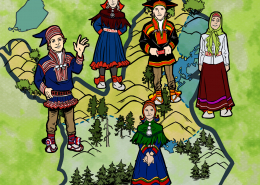